The clean water that washes over hands in sinks, spinning down the drain just fractions less pure than what came from the tap; laundry water that pumps into waste pipes by the gallon from households every day; water draining out of a tub that was safe enough for bathers to soak in. That water—slightly used but not fully soiled—is called grey water. And in an increasingly drought-stricken world, it may be the best tool to have in your water conservation toolbox.

According to a 2018 study, grey water can account for up to 75 percent of the wastewater volume produced by the average household. That means three-quarters of the water discarded from homes—and its high potential for reuse—is often literally washed right down the drain.

The precise definition of grey water gets a little murky, as its exact parameters differ regionally. But, fundamentally, it is defined as lightly used water from sinks, showers and laundry. Perfectly safe for applications on gardens, yards and crops, the water provides a solution for sustaining plant life on properties with strict water-use restrictions in regions experiencing drought and water shortages.

Grey water is relatively easy to capture, and systems to do so already exist. So why has agriculture been so slow to embrace it? The reasons are myriad and complex, but it mostly boils down to a lack of education and infrastructure.

The Benefits of Grey Water

An architect by trade, Leigh Jerrard’s interest in water conservation caused him to shift his career path to focus on sustainable grey water reuse. In 2009, Jerrard started Greywater Corps, which installs small-scale grey water recycling systems that pump the lightly used water into yards and gardens for California homes and buildings.

“There’s this great double benefit to grey water, which is that you’re saving water on the incoming side and you’re reducing sewage on the outgoing side,” says Jerrard, highlighting that gardens and plants see the benefits as well. “There are nutrients in grey water that citrus trees and roses are going to love.”

Unlike black water, or the water from bathrooms and toilets that comes into contact with sewage, grey water can be reused in many different ways without chemical intervention. However, the slightly used water contains organic matter from things such as soap and detergents and from coming into contact with dirt and skin, so it does require a little special treatment.

For that reason, the irrigation systems Jerrard and his team install are different from the typical irrigation setup. Unlike traditional irrigation systems or rainwater harvesting tanks that rely on stored water to be used on demand, grey water has to be pumped out immediately and can not be saved for use at a later time. 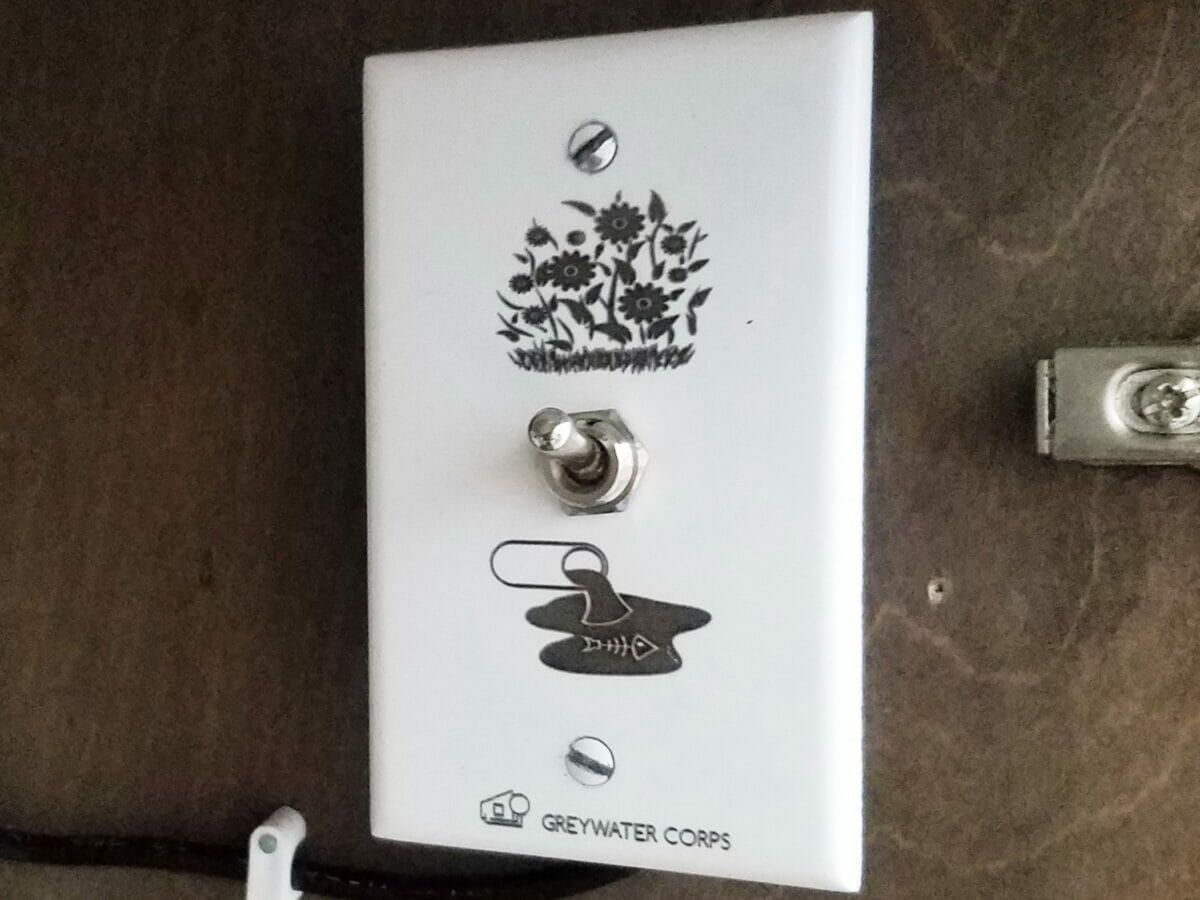 The non-potable water should not be stored in tanks or reserves in order to avoid decomposition of particles in the water. When grey water is left stagnant, explains Jerrard, “it will basically grow anaerobic bacteria in a tank after 24 hours and start to get funky.” But it’s still perfectly suitable for non-contact uses such as growing food crops, watering lawns and gardens and even for toilet flushing.

Jerrard first learned about grey water reuse water systems thanks to workshops and resources offered by a nonprofit called Greywater Action, which focuses on educating residents and tradespeople on how to install them. Now, Greywater Corps installs about 100 of the systems in the state of California each year.

In most homes, grey water and black water pipes are combined and, therefore, cannot be used for irrigation. So the first step involved in installing the grey water systems is rigging piping to keep grey water and septic water separate. Then the “low-tech” system utilizes simple subsurface pipes and emitters that rely on pumps or gravity to move the water from homes to gardens and lawns.

In states where grey water reuse is completely legal—including Arizona, Texas and California—at-home grey water reuse systems can be an effective irrigation choice for homeowners, who can choose to repipe their homes to keep grey water separate from wastewater.

But as Laura Allen, a founding member of Greywater Action, notes, not all grey water is created equally or treated as such. “You have to pick your products,” says Allen. Laundry detergents, bath soaps and body washes can be sources of potentially harmful chemicals and high levels of salinity, so focusing on natural or biodegradable products is integral in creating crop-ready grey water.

Despite its many benefits, grey water’s potential largely remains untapped. This is mainly due to inconsistent regulations state by state, differing plumbing codes and systems, as well as a general lack of education.

Grey water use does not have the green light nationally. While more arid regions in the western United States have legalized the reuse of grey water, nearly half the country has not legalized or even regulated the use of the lightly used water at all.

Khaled Bali, an irrigation water management specialist at the University of California, explains that the reasons grey water irrigation isn’t a common practice for agriculture boil down to convenience, cost and quantity. Repiping and installing a grey water irrigation system costs time and money, and for farmers, the results may not be worth it. “With grey water, you’re not talking about much volume. If the daily use of water is anywhere from maybe 40 to 50 gallons a day, even if you take 50 percent of that and want to use it in a farm, it’s not a very large amount of water,” he says.

For complex grey water irrigation systems, the price tag can ring in the thousands, not including the energy it costs to pump the water into fields. With high cost and little payout, “It’s not cost effective to use it on farms,” Bali adds.

Shreya Ramachandran, a California native who has family ties to India, wants to put that resource to good use. For her, it was the drought-stricken nature of her surroundings that sparked her passion for water conservation. The severity of water shortages around the world became abundantly clear to Ramachandran after a visit to see her grandmother in India.

“When we opened up the tap to get water, there would be nothing, [it would] just be this creaking noise and maybe a gust of air or sometimes this murky brown liquid you wouldn’t even want to touch,” she says. “Collectively, experiencing drought and hearing about it in different parts of the world was really what got me started.”

After witnessing first-hand the water scarcity issues in India and the now near-constant state of drought in California, Ramachandran started to research practical and doable ways to preserve water, and in doing so, discovered grey water. “It’s just such an effective water conservation tool, especially in comparison to many other commonly practiced methods. Ramachandran started her own nonprofit, called The Grey Water Project, in 2016. The organization offers educational programs, workshops and events to promote grey water recycling. 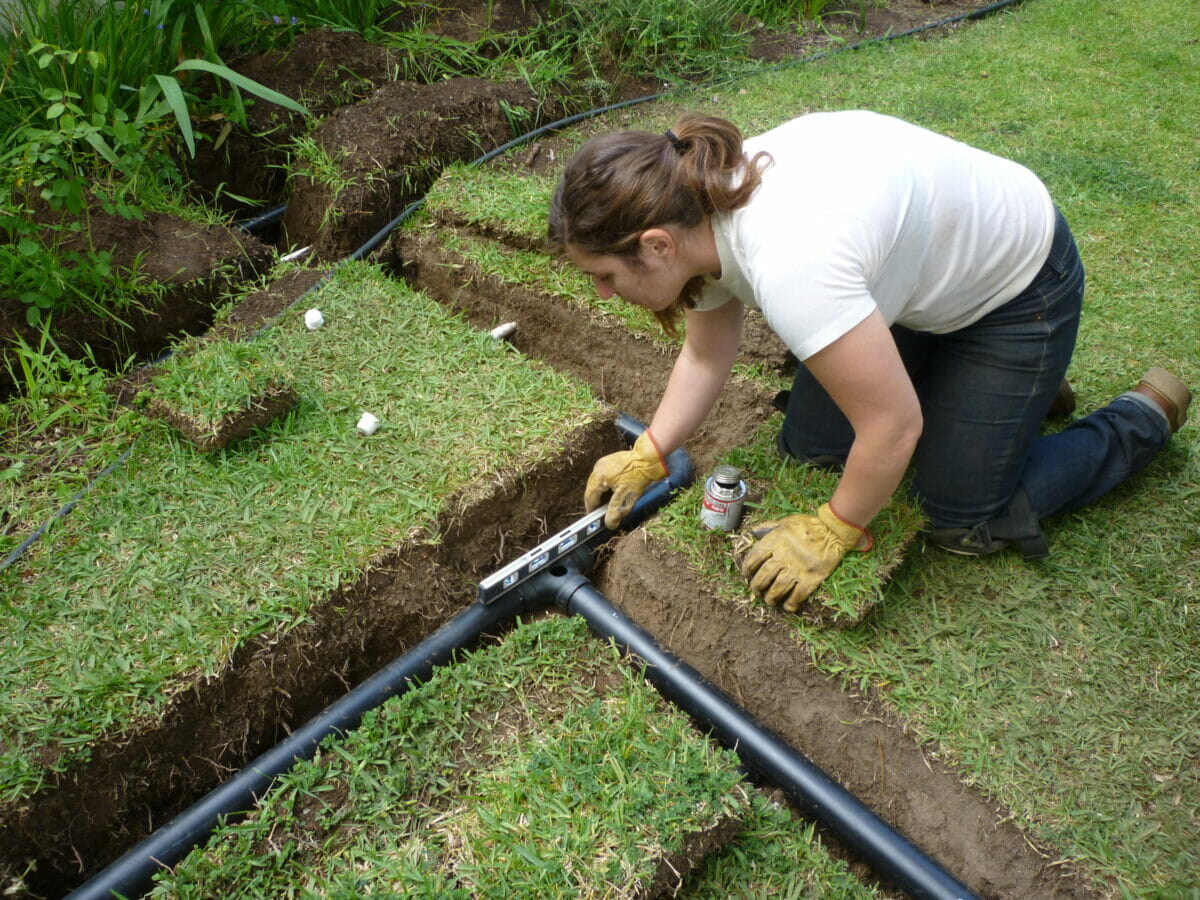 After diving into the world of grey water reuse, Ramachandran set her focus on spreading the word. She quickly learned just how necessary that work was. Besides policy that allows the use of grey water, lack of education is one of the biggest roadblocks she sees when it comes to recycling the water, as it’s hard to implement broadscale policy changes without first generating interest.

In lieu of common knowledge surrounding it, impassioned environmentalists, scientists and community members have made educating about reusing grey water and installation of systems that make that possibility their priority.

With regulatory grey areas surrounding grey water, individual systems to recycle grey water remain the most viable option, but they still require homeowners to choose to install the right piping themselves and pay the price.

‘There’s a Lot of Potential and Opportunity’

A future where grey water flows anywhere besides down residential drains would start at the state level, with new building codes that require piping grey water separation in new structures, says Bali. “Building codes could be changed to where at least some people who want to use grey water would have the ability to. Builders could utilize that process of developing a system where you can capture [grey water] and use it for landscaping or in a garden when they are building new homes or apartments,” he says.

And some states are taking small steps in that direction. For example, even though grey water use was illegal in California until about 14 years ago, now an entire chapter of the state’s plumbing code for building guidelines is devoted to piping potential for grey water reuse.

Grey water irrigation systems that would sustain large-scale agriculture are still only theoretical, but Ramachandran hopes to see more prominent use of it in the industry in the future.

“It would be really nice to see more agricultural grey water applications,” she says. “There’s a lot of potential and a lot of opportunity there. That’s what I focus on, a lot of what my research was on reusing grey water for irrigation purposes. If done correctly—there are guidelines you have to follow, of course—but it can be done in a safe and sustainable manner.”

But without the volume conventional agriculture requires, grey water reuse irrigation systems would be supplemental at best as a large-scale farming resource.

As far as small-scale growing with the water, Jerrard’s own acreage proves the systems can be highly effective. He uses grey water irrigation at home to sustain his yard full of healthy fruit trees. “Just in my front yard, I’ve got peach trees, avocados, an apple tree, kumquats, ruby red grapefruits,” he says. “With just two people living here, [we’re] pretty much sustaining a whole orchard with grey water.”