In early 2020, at the peak of the COVID-19 pandemic, when doors of storefronts across the country were closed and minds of isolated individuals were opening to the possibilities of gardening in their new-found free time, Reana Kovalcik had an idea.

The Washington, DC resident has a background in mutual aid work, public policy and over a decade of experience in the sustainable agriculture movement and watched as more and more people grew interested in gardening, growing and reconnecting to the land.

Kovalcik saw people reach for gardening as something they could do safely in their homes and yards during lockdown—be it as a therapeutic, social or emotional outlet or as a supplement to groceries in the face of supermarket scarcities. Not wanting to miss an opportunity to connect more people to growing food when interest was high but resources were not, Kovalcik founded Share a Seed, a mutual aid seed-sharing and gardening initiative aimed at connecting crop-curious community members—especially in lower-resourced communities—to seed surpluses. 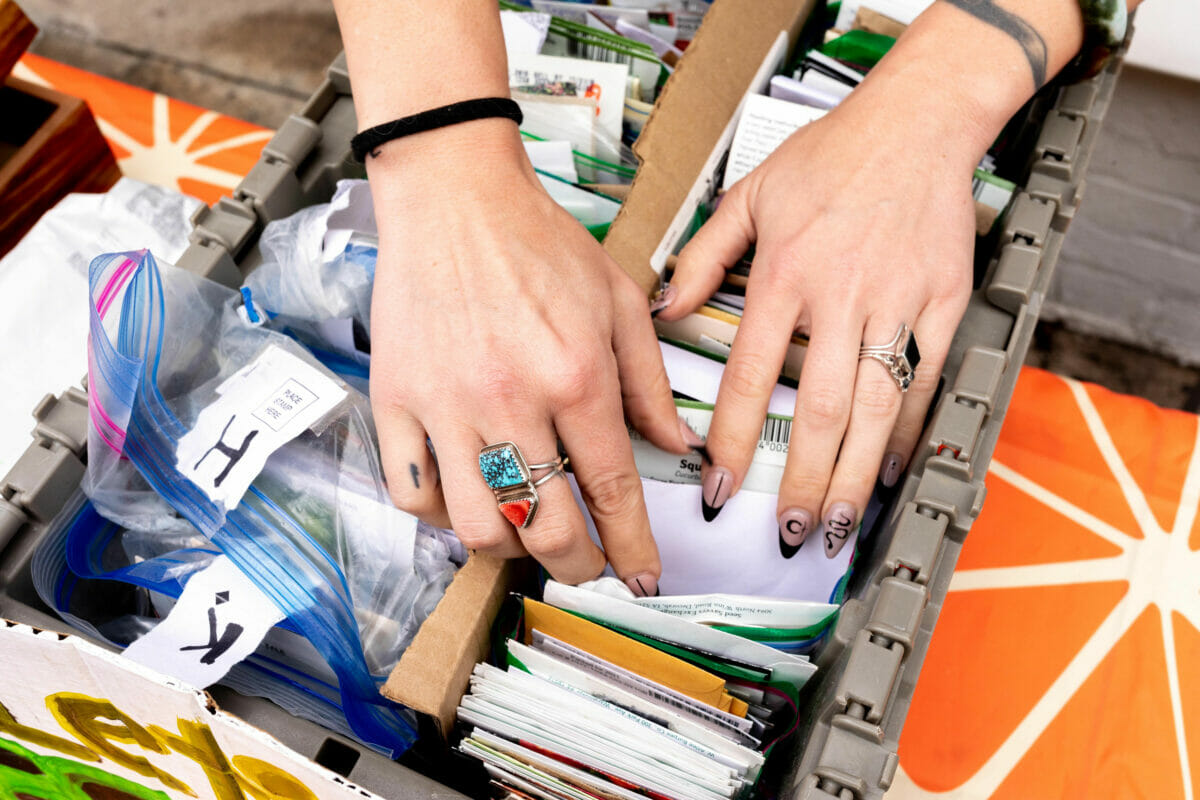 “If you’re a gardener, grower or farmer, you know that you’re constantly sitting on some kind of surplus of something or another, especially as an urban grower where you don’t need every last seed,” says Kovalcik. And with her years of work in both mutual aid and agriculture, she saw a chance to connect both. “I thought, ‘Why can’t we apply the same mutual aid lens we have with essentials to gardening?’ And so that’s where the impetus for Share a Seed came from,” she says.

The program launched officially in February 2021 as part of Slow Food USA, of which Kovalcik is the DC board member.

The concept is simple but effective. The goal is to connect communities, especially those with fewer resources, to surplus—or, as Kovalcik explains it, “creating abundance in places of scarcity.” On the ground, that looks like growers, gardeners, and seed retailers donating resources they have a surplus of, such as seeds, soil or tools, to Share a Seed. The program then redistributes them at events throughout the District of Columbia, Maryland and Virginia. 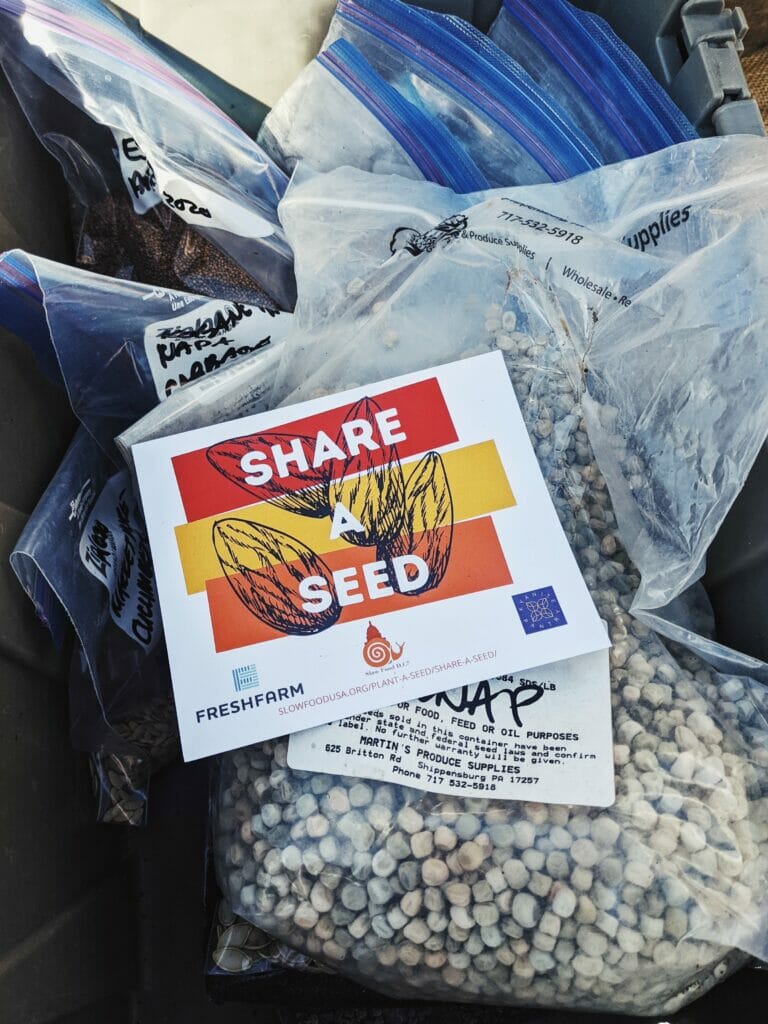 While the main focus for the seeds is food crops, Share a Seed supplies an array of different plant seeds. “I would say people most commonly look for the staple stuff,” she explains. “So, tomatoes and peppers are really popular in this population. Given that we’re in the southeast, we also have a lot of excitement around collards and okra.”

She also always tries to have some herb seeds to share, as they are an accessible place for many people to start and can be grown inside an apartment or outdoors, as well as offering flower seeds.

Before sharing the seeds, Kovalcik works behind the scenes to collect them, requesting surplus seeds from companies or organizing in-person donation opportunities. The seeds end up at the programs booth at farmers’ markets, community gardens or whatever event is on the books for the day—which are usually posted to the Share a Seed social media pages. 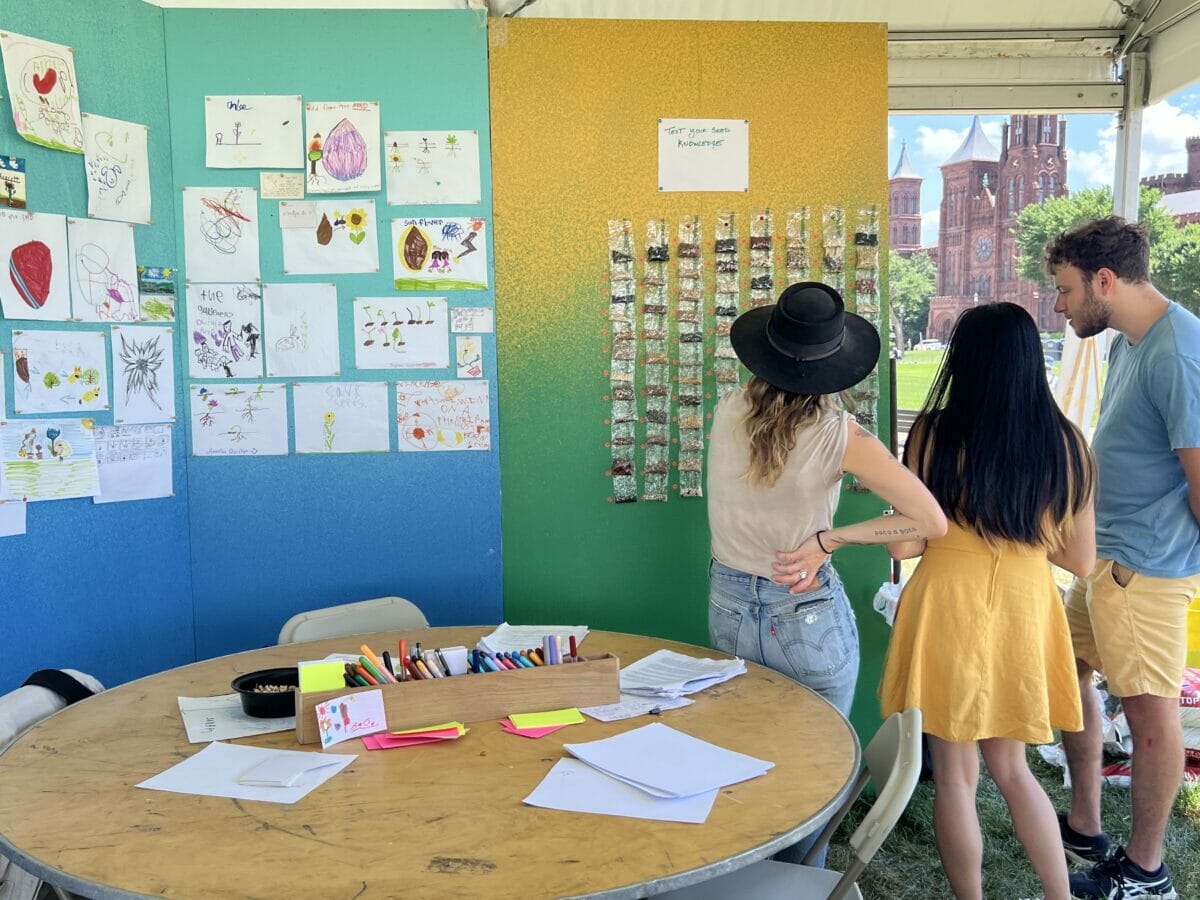 Taking and donating the seeds at the booth is as easy as walking up and grabbing or dropping off a sealed seed bag. Think of those little free libraries where neighbors drop off books they no longer need just to share with passers-by who want them. The Share a Seed program mirrors that ideology, with those who have an abundance of seeds they have no use for passing them on to others.

In fact, one of Share a Seed’s most recent developments is a little library of its own. On the streets of DC, the program launched Little Seed Libraries, where community members can leave packages of excess seeds or those in need can take a few for themselves. The libraries—currently located at Powell Community Farm and UDC Bertie Backus Urban Food Hub—offer what  Kovalcik calls “inclusive architecture,” meaning the cabinets full of free seeds are connected to a bench, inviting rest and a place to connect surrounding the donated seeds.

Keeping the initiative people-focused and hands-on at an in-person community level is integral to Share a Seeds’ mission. So, as far as the future of the program goes, Kovalcik says they welcome growth but are not actively seeking it.

“The goal is to share with this community and to inspire other folks to share with other communities. So, as a mutual aid organization, we’re able to really meet folks where they’re at and do this kind of ground-level work of connecting with people,” she says. “That’s the way in which I would like to grow, by being able to share with more folks, to spread our tendrils. But in terms of the traditional capitalist model of growth, I think we’re better suited to stay a community organization.”