It takes about four years for an almond tree to bear fruit and closer to seven years to get a full yield from the tree. That’s seven years of planning, planting, irrigating, pruning and tending before the big payoff. It’s a lot to ask of farmers in California’s Central Valley, where nearly 80 percent of the world’s almonds are grown. In 2021 alone, the 7,600 almond farmers in the state grew nearly three billion pounds of almonds, making it the state’s most valuable crop.

But now, facing extreme weather events, shrinking water resources and rising costs, some farmers are leaving almonds behind, opting to put their efforts behind in-demand crops such as canning tomatoes, garlic or onions. In fact, this year’s almond harvest is expected to drop from last year’s, with drought and frost damage two of the main reasons for the dip. With ongoing droughts, heatwaves and wildfires across California, the state’s farmers have less water to work with. That makes it hard to commit to a crop that takes years of careful irrigation before it produces a single kernel.

Almonds get a bad reputation for being a water-intensive crop. A 2019 study showed that it takes on average 12 liters of water to grow one almond kernel, although there was “substantial variation” over time and geographic area. That same study also found almonds to be among the top three foods “providing the greatest nutritional benefit per unit weight; however, they had the highest water footprint value per unit weight.” Of the 34 million acre-feet of water (the amount needed to cover an acre with a foot of water) that California uses for agriculture each year, the vast majority of that comes from surface water, such as diverting streams or pumped from ground water. One report calculated that almonds use 10 percent of California’s annual water supply, which, on its face, seems like a lot. But is it?

“Almonds are not notably different in their water use than essentially any other irrigated agricultural crop,” says Patrick H. Brown, a distinguished professor of plant sciences at UC Davis. Not only do almonds use a proportionate amount of water, Brown says that, for farmers, the crop is one of the best investments for limited water resources, as almonds generate a solidly good economic return. “A pound of almonds, when they are priced at $2 to $4 per pound, equates to a very good choice of what to use your water on.” In a good year, says Brown, prices have shot as high as $6 per pound. Plus, that’s just the going rate for a pound of the almond kernel, the nut we eat (or use to make milk or flour). There’s also a secondary market for the hulls and shells, as they’re used in dairy cattle feed, farm bedding material and even cosmetics.

That’s one of the reasons growers such as Kiku Severson are optimistic about the future of almonds, and are working to make the industry more sustainable. Severson works alongside her parents at their farm in Turlock, California. She’s also a member of the California Almond Board, focusing on the sustainability efforts of the industry. Severson says she’s continually impressed by the efforts of almond farmers to adapt as their resources get scarcer. “We’ve been researching water since the ’90s,” Severson says, noting that, at the time, micro-irrigation—targeting water directly to a tree’s roots rather than spraying it uniformly over an orchard—was a relatively new innovation. Now, more than 80 percent of almond farmers use micro-irrigation, “and we’ve been able to reduce water use by about 33 percent to grow a pound of almonds.”

Now, Severson says farmers are relying further on technology such as precision sensors to pinpoint what specific plants might need and make the best use of the resources. Because the global supply of almonds is so concentrated in this one geographic area, Severson says it’s “a huge responsibility. And I think almond farmers really feel that, and we want to be leaders in this agriculture space.”

And it’s not just the growers. Food brands are getting involved, too, with initiatives such as The Almond Project, whose founding partners include snack and baking company Simple Mills, plant-based meal delivery service Daily Harvest, almond flour-based frozen food company Capello’s and Treehouse Almonds, along with the White Buffalo Land Trust and a family of farmers who are leading the on-the-ground work. The five-year project will test a variety of soil health practices and aims to measure which combination of factors is the most ecologically beneficial and produces the best almonds. They’re testing things such as animal integration, reducing the amount of synthetic pesticides and fertilizers and increased compost applications. When it comes to cover crops, they’re using more than 30 different species to introduce biodiversity, testing their outcomes. 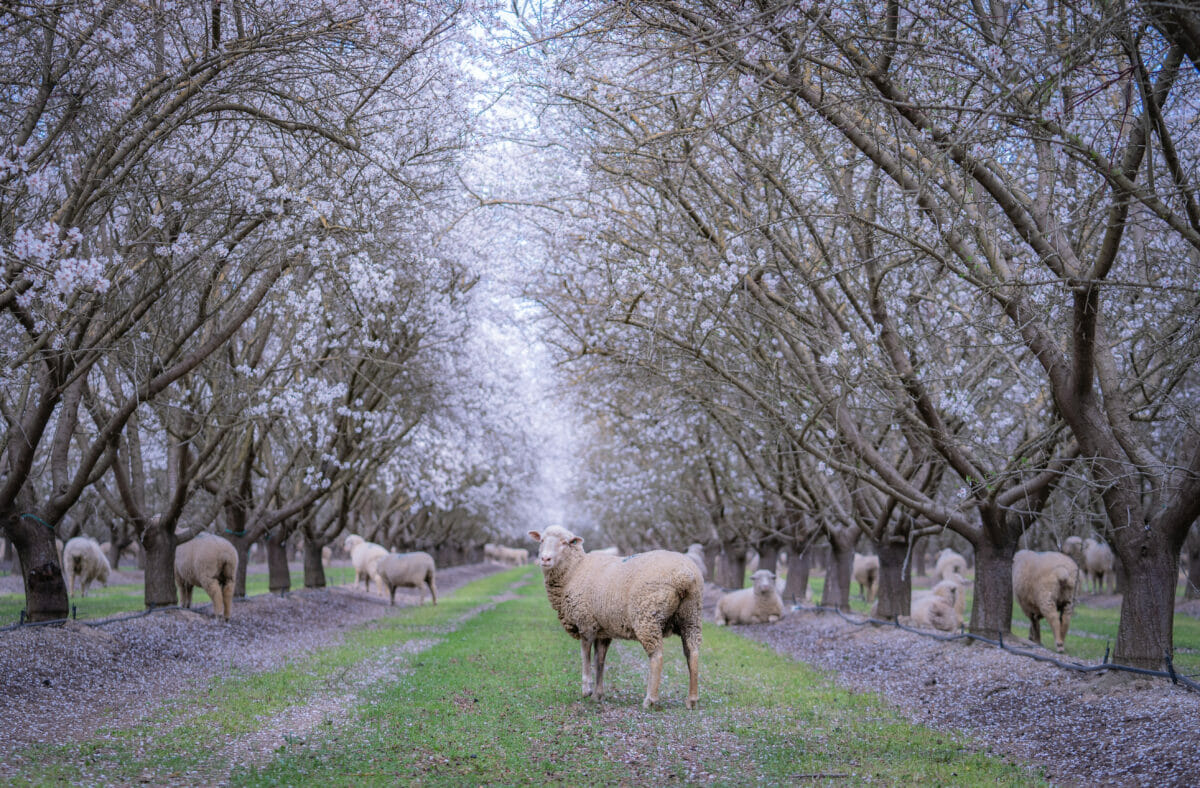 One of the goals is to ensure that there’s a future for California almonds. “We’re thinking about the holistic ecosystem, to identify these areas of opportunity and to make continuous progress, rather than vilifying or boycotting a specific ingredient that has become quite a lightning rod,” says Christina Skonberg, director of sustainability and missions at Simple Mills. Skonberg says they also wanted to take on this project to reduce the financial burden on farmers when testing out new practices. “Trying something like grazing sheep through the orchard, which is one of the practices we’re testing, that risk is shared by all of the partners and doesn’t fall fully on the farmer.”

The Almond Project is only a five-year initiative, but farmers don’t have five years. Changes are happening now. The project’s partners understand the urgency. “We can’t afford to wait until five years from now to take any action,” says Skonberg. So, while there are formal measurements taken at regular intervals over the length of the project, they are also leaning on the expertise of the farmers to see what is working anecdotally, and adjusting as they go. “We’re using those learnings, and existing research and projects on other lands, to make educated guesses about what might work in this system.”

RELATED: The Past, Present and Future of the West’s Water Woes

There are also newer practices when an orchard reaches the end of its lifecycle, usually after about 25 years. Whole orchard recycling, where old trees are ground into chips and mixed in with the soil before planting new trees, is proving to be a great way for farmers to increase yields in subsequent years, as well as improve soil health and carbon sequestration. Initial research showed a 30-percent increase in the soil’s ability to hold water after whole orchard recycling. Severson says she’s seen many farmers try it out, even though it’s still being studied. “Almond farmers are really eager to adopt new practices,” says Severson. “I’m very optimistic that we could be potentially a carbon-neutral or carbon-negative food in the future with more research and more adoption of new practices.”

That would be great, both for almond growers and consumers. But getting to a carbon-neutral normal will likely take a while. In the meantime, Brown says the total irrigated area in California will diminish. Right now, about nine million acres are irrigated annually, which “will undoubtedly shrink in the coming years because of competition for water sources,” he says.

Of the irrigated acreage that remains, Brown predicts that more of it will be dedicated to crops such as almonds, which yield the biggest profits for the available water. “Anybody who’s got any smarts about them will use a valuable and expensive resource on the product that gives the best economic outcome, and that’s almonds or pistachios.”

So, while California grapples with droughts, wildfires and a tightening supply of water, almonds might actually weather the storm without too many losses—that is, if growers continue to adapt to the changes.