Biting into a fresh, raw oyster is like kissing the sea. You taste the salt water, and can almost feel the ocean breeze. Each oyster is unique, distinct, and a direct result of where and how it grows, and who grows it. But until recently, not much thought was given to the impact of the gear—often plastic—used in the process.

From holding cages to flotation buoys to the packaging that brings oysters from farm to restaurant or shop, much of the gear that makes oyster farming feasible is made of plastics. “Lots of different plastics are used in aquaculture,” says Joel Baziuk, associate director of the Global Ghost Gear Initiative (GGGI) at the Ocean Conservatory.”Nets, buoys, piping, mesh containers… It’s basically found everywhere, which isn’t surprising, it’s very useful.”

Yet while plastic may be prized for its ability to offer inexpensive and durable solutions for the aquaculture industry, it’s also problematic.

“As an oyster farmer, I’m also trying to improve the flavor, to raise the level of taste. Oysters are just like wine; their environment flavors them. It got me thinking—wouldn’t the gear affect the flavor?” says Jennifer Scappatura Harrington, owner of the Rhode Island-based Quonnie Siren Oysters.

Beyond taste, there’s the issue of plastic’s negative impact on the health of people and ecosystems. All that plastic damages the planet, us and other animals. Almost all plastics are made from fossil fuel products, and as the United Nations has warned more than once: If we’re going to avoid the worst of the climate crisis, we have to reduce our reliance on fossil fuels dramatically.

Wildlife can also become tangled in or ingest plastic—especially if it breaks free, which can also be an operational hazard. Then there is the impact of plastics breaking down into microplastics which, in addition to ending up in the water, end up in us, too. Researchers detected microplastics in human blood for the first time in March, which means they’re likely traveling around more than one human body right now.

“The long term effects are not well understood, but I think most people will agree that they’d rather not have plastic in their liver,” says Baziuk. 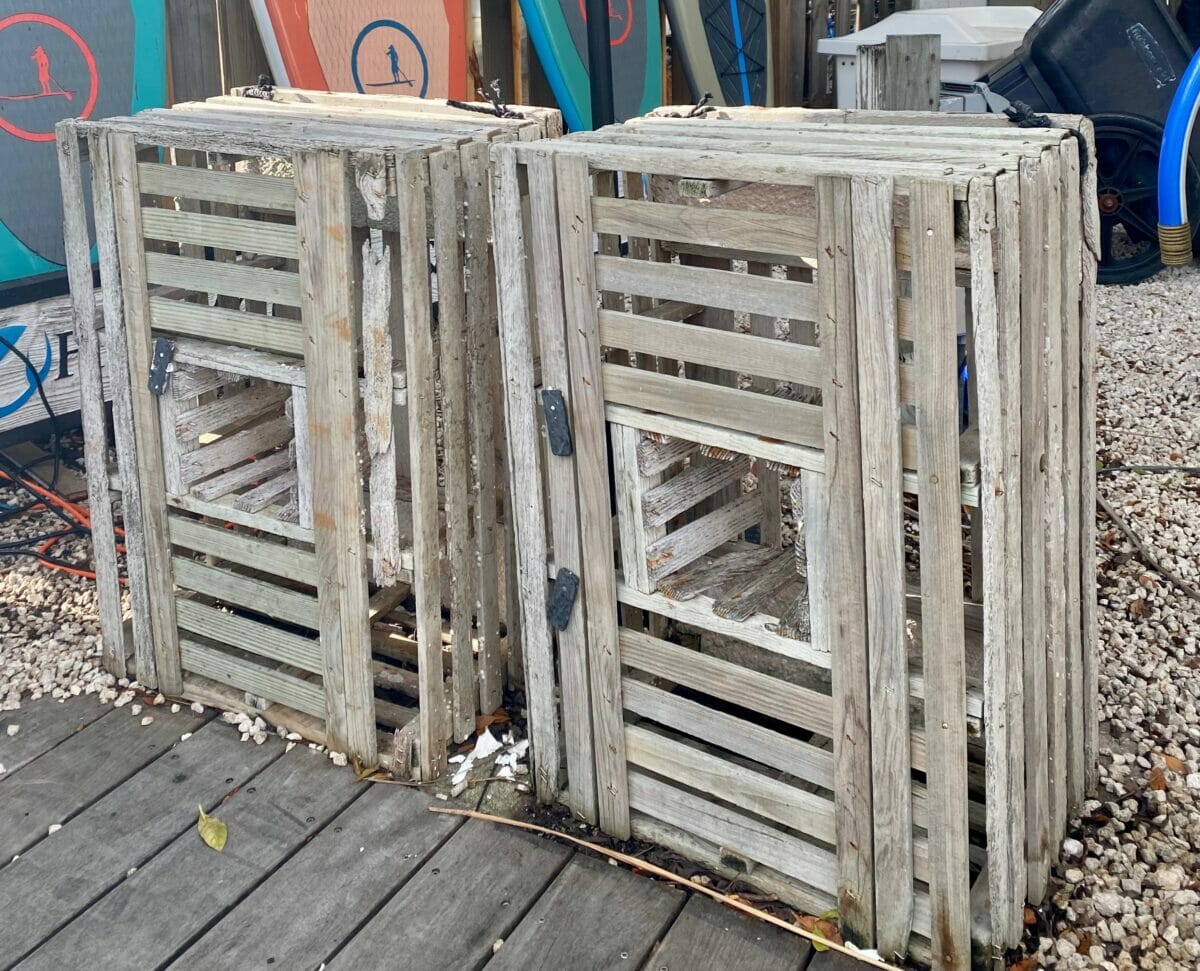 Removing Plastics From Our Waters

In an effort to reduce their contributions to the global reliance on plastic products, innovative and environmentally conscious oyster farmers like Harrington are looking for alternatives to the plastic gear commonly used in bivalve farming and other types of aquaculture. It has not been an easy feat.

“Plastics and climate change are tightly connected, and as an oyster farmer who is relying on clean water, I kept thinking, ‘Why would I actively undermine my own ecosystem?’” says Maine-based oyster farmer Abby Barrows of Long Cove Sea Farm.

In addition to being an oyster farmer and mom, Barrows is also a marine scientist. She spent years traveling around the world researching the impact of oceanic microplastic pollution. Now she’s back home raising a family, growing and selling oysters and fighting to make any bit of difference she can.

A few months into a two-year grant from Builders Initiative, Barrows is researching and designing viable alternatives to plastic aquaculture gear. “I don’t know if it’s possible, but we’re exploring it,” she says. A few of the materials she’s looking at include metal, cedar and cork, as well as mycelium-based buoys from Sue Van Hook Mushroom Company.

RELATED: These Farmers and Ranchers Turn Trash Into Treasure

While Barrows sets out to reduce the amount of plastic used in aquaculture primarily from an environmental standpoint, Harrington is researching what using non-plastic gear means for taste. Right now, she’s trialing the success of wooden holding tanks made out of oak.

“It gives [the oysters] a different flavor, it’s slightly oaky,” says Harrington, who’s thought about how wooden gear could be used for several years. She started the oyster farm in 2014, and after learning about French oyster farmers who use cranberries and lemons to flavor their oysters, started brainstorming. Then, while traveling in the Florida Keys, she noticed farmers using wooden cages for lobsters and crabs; she decided to commit to testing it out herself, but she readily admits it’s not a perfect swap.

“Oak doesn’t last long [in the water],” says Harrington. “I’m not sure how feasible it will be but I’m also looking at basket weaving materials.”

The plastic problem doesn’t end at the farm. How oysters are packaged and transported is an issue, too. That’s why Eric Oransky of Maine Ocean Farms co-founded Ocean Farm Supply, a company that sells mesh sleeve harvest bags made in partnership with Austrian-based Packnatur. The wood-based packaging is 100-percent compostable and biodegradable. 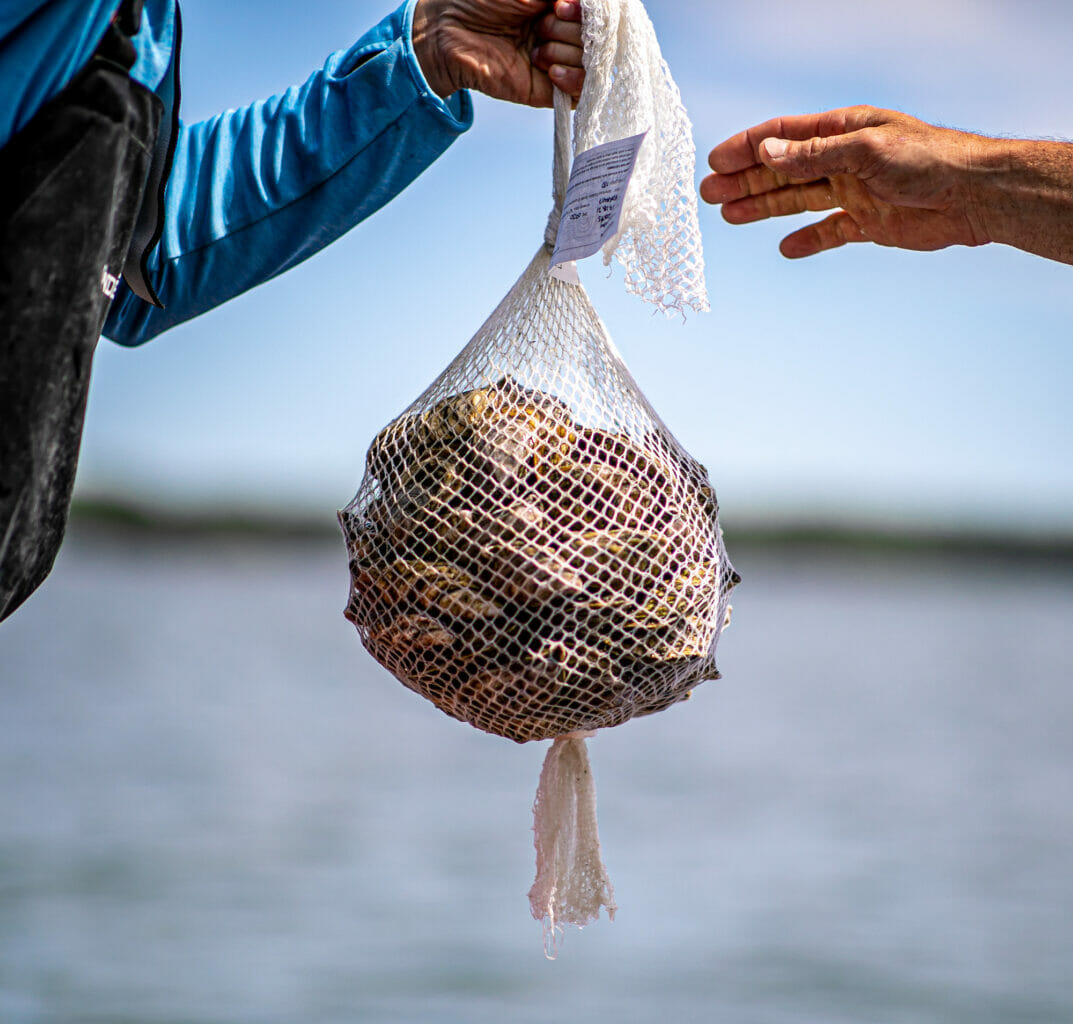 “It didn’t make sense. We’re growing these oysters that are improving the ecology and then we’re putting them in a plastic mesh bag to bring them to a restaurant, where that plastic goes in the trash,” says Oransky. “We wanted to create a product that doesn’t require education of the end user, that is just better from the start, and is going to turn into dirt in eight to 12 weeks.” The company is also working on several other products, including a reusable shopping bag that will also be compostable.

The big question is just how feasible swapping plastic equipment for alternatives will be, and how big of a difference one small operation can make on the larger system. When you think about all the plastic in our everyday lives, it can seem like a hopeless endeavor.

“The industry on a whole is moving away from single-use plastics. No one wants to be a part of that problem, but when we’re talking about microplastics and how these species are being affected, it would take the world at large to invest in a strategy to reduce microplastics,” says Doug Bush of The Cultured Abalone, an oyster farm in Goleta, California. “It would be meaningless without a global commitment.”

That might be true, but if oyster farmers like Barrows, Harrington and Oransky don’t try, nothing will ever change.

“These projects are a drop in the bucket,” says Barrows, “but it gives me hope that the ripple-out affects a broader paradigm shift in our materials.”