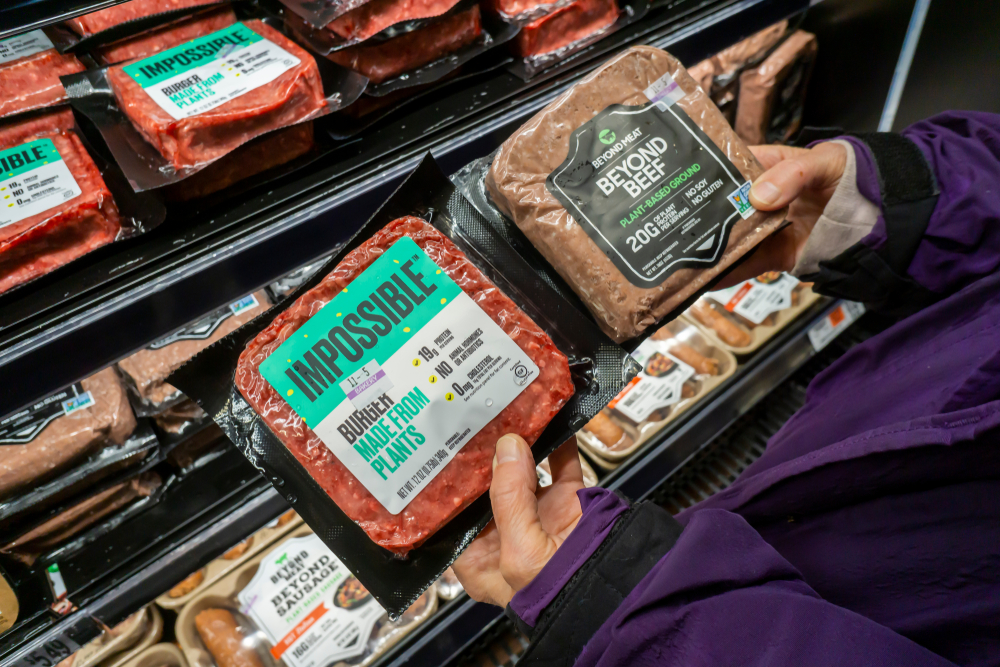 As the threat of climate change intensifies, there’s increasing pressure for consumers to embrace more environmentally friendly foods. The adoption of plant-based meats, we’ve been told, is one way to do that.

But what are the impacts if we all start swapping our Angus beef for Impossible burgers? Researchers at Cornell and Johns Hopkins University set out to find out.

According to their recent study, published in Lancet Planet Health, a shift towards plant-based beef could reduce agriculture’s footprint anywhere between 2.5 percent and 13.5 percent. At the same time, it could threaten more than 1.5 million jobs within the primary production and beef processing sector. This calculation was made based on models that looked at what it would mean to decrease the number of cows for beef production by a minimum of two million and a maximum of 12 million.

Beef alone is a $95-billion-a-year business, as numbers from the USDA show. The North American Meat Institute (NAMI) estimates that, in total, the meat industry contributes about $894 billion to the American economy. But given that there’s a growing push towards embracing more plant-based protein, the study’s authors say the government should think strategically about how it might adapt. For instance, the paper poses a question about what the conditions would be like for workers moving to new jobs, and whether or not marginalized workers, such as migrant workers, would be negatively impacted. The processing sector relies primarily on migrant workers. The authors note that, if labor mobility is constrained, these workers could see negative impacts on their bargaining power, future wages and ability to demand safer working conditions.

As the authors note, however, widely adopting plant-based alternatives could restructure the food system and make it more “efficient.” There could be new demand for crops that were previously less important, such as pulses, where jobs could be redistributed.

“There are good reasons for regulators and policymakers to encourage these up-and-coming technologies,” says Mario Herrero, the study’s co-author and scholar at the Cornell Atkinson Center for Sustainability. “Politicians must remain aware [of] unintended negative consequences and commit to mitigating changes that are ethically concerning, including harms to disadvantaged workers and hard-hit local communities and small producers.”

One other unintended consequence, from an animal welfare standpoint, could be that beef jobs and resources transfer over to the pork and poultry sectors. To project potential growth in other areas, researchers ran different models, which suggest that if anywhere from two million to 12 million cows are taken out of the supply chain, it could mean 16 million to 94 million additional chickens or up to 1.4 million pigs.

And given how confined feeding operations are in pig and poultry sectors, an increase in plant-based beef raises an important discussion about the impact of raising pigs and poultry in larger numbers.

In poultry, there’s already concern about confined feeding. For example, many animal welfare advocates have expressed concern over “de-beaking.” This consists of cutting or burning off the tip of the beaks of poultry so they cannot injure one another when confined in close quarters. Excessive antibiotic use has also been cited as a problem due to factory farmers wanting and needing to limit the spread of disease, which is accelerated by close confinement and stress. More and more bacteria are becoming resistant to antibiotics, which limits the range of therapies that can successfully be used to protect human health. A similar concern over antibiotic use in the pork industry exists. Pigs raised in close confinement are also more likely to engage in tail biting and develop bursitis and other joint ailments. Bursitis occurs when bursae, fluid-filled sacs that pad the joints, become inflamed, causing intense pain.

Researchers note that there is already a wide range of plant-based alternatives on the market, as well as others that will be introduced soon. If there is a willingness to embrace them, they say large increases in animals on industrial farms would be less likely.