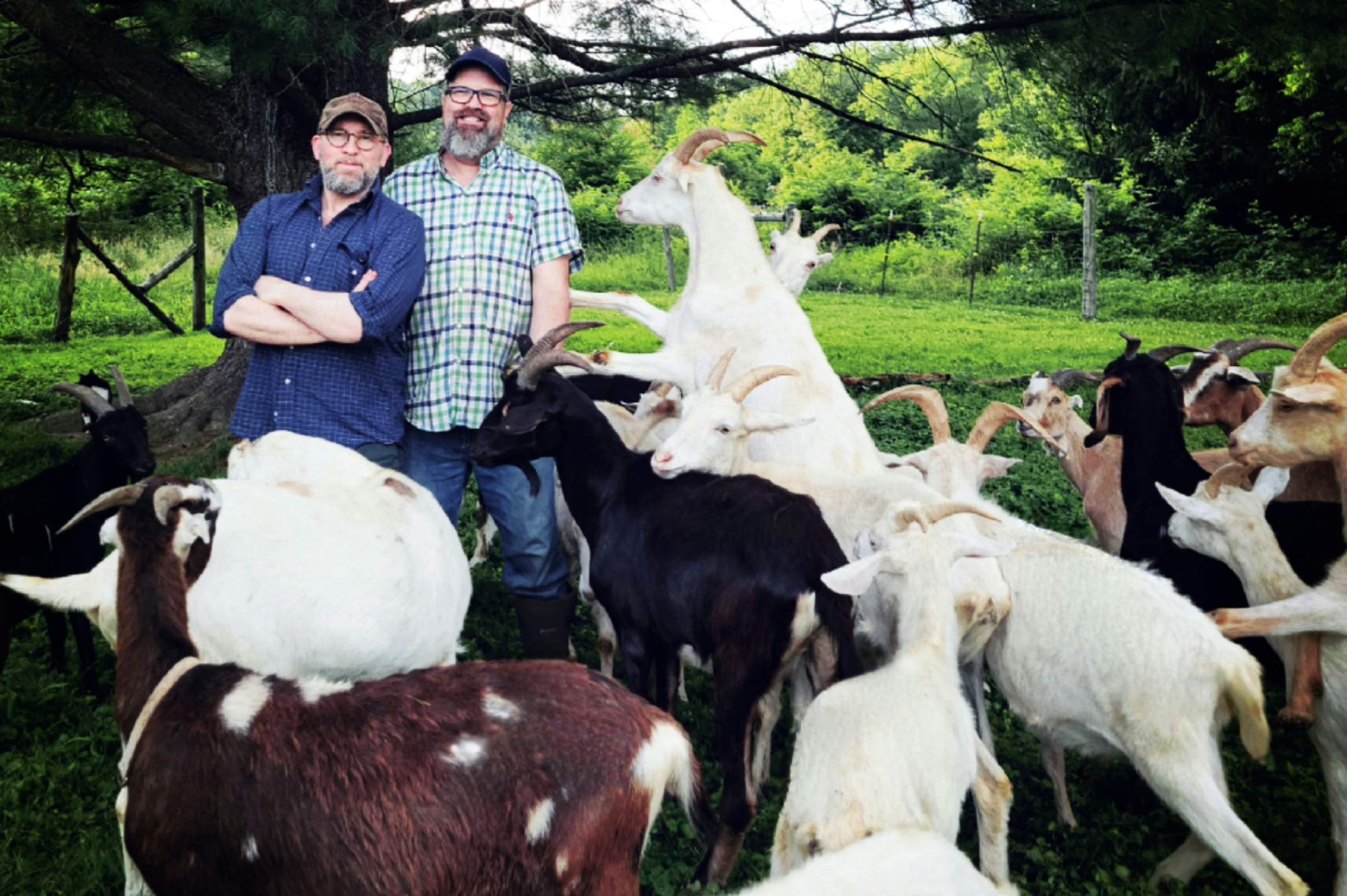 While they are known as the “Gay Goat Guys,” neither Chad Snelling nor Jeff Wince had any plans to market themselves that way—or to raise goats, for that matter.

Neither man grew up on a farm, and Wince had only a passing knowledge of farming. But living in Columbus, Ohio, the pair had a dream to move to the country, just like the stars of The Fabulous Beekman Boys. The reality show followed another married couple, Brent and Josh, as they moved to a farm in upstate New York. Wince was enamored with the idea, but Snelling wasn’t so sure. And then, one day about 12 years ago, Snelling got a text from his husband.

“He said, ‘Hey, I think I found our Beekman farm,’” Snelling recalls. They bought a 100-year-old farm property about an hour outside of Columbus, in central Ohio, and opened Tilton Hollow Farm. At first, the couple started small; a garden patch here, a flock of chickens there. And then one day, Snelling received another message from Wince. “He went to a livestock auction, and called me on the way home and said, ‘Hey, put a pan of water out and get the chickens out of the big coop.’ And he brought home our first goat.”

If moving to the farm was dipping a toe in the water of their new life, that first goat was Wince and Snelling jumping head first into the lake. After that, they were all in. One goat became three goats, which became10, which became a herd. And while they didn’t know much about the animals when they started, Snelling says he was surprised to learn just how smart goats are.

Now, they have close to 60 goats, which they feed in set groups of six to ensure everyone gets enough grain. “So, I’ll say, ‘I need Holly on the milk stand’ and Holly will come right in with her group, and they all go to their favorite spot. And as soon as one group is done, the next group is already ready at the door because they know they’re next,” Snelling says.

It’s those little things from the goats—how they know their names and have distinct personalities—that changed the way Snelling and Wince approached raising goats. For many farmers, once an animal has stopped producing milk or other useful products, it’s time for it to go. An unproductive animal is taking up valuable space in the barn. But Snelling and Wince can’t bring themselves to do that. If a goat has spent its whole life with them, it’s not going anywhere once its milk dries up. It’s part of the family.

“We’re not going to just say, well, you’ve given us milk for years and helped us sell products and are part of our life here, but now we’re going to send you to the auction. And we don’t know what’s gonna happen to you. Good luck. That’s not how we do things,” Snelling says. “We look at it like they’re all valuable. They all contribute.” He notes that goats have really strong family bonds, so they’ll also never sell a baby goat if it’s the mother’s only kid.

In order to afford the costs associated with keeping all of those older goats, Tilton Hollow Farms offers customers a chance to sponsor a goat. Customers can choose three-, six- or 12-month increments of sponsorship, and in exchange, they’ll get updates on their sponsored goat. “We send you an email with pictures of the goat and a little bit about it and occasional updates,” says Snelling. That sponsorship money helps offset the cost of feeding the retired goats, but it also reaffirms their commitment to farming differently, by putting the goats first.

This is actually how the Gay Goat Guys name came about. Years ago at a farm show, the pair were recognized by someone in the crowd. “You’re the Gay Goat Guys, right?” the woman asked. And they looked at each other and realized, yes, indeed they were. In that instance, they were recognized for their commitment to their animals, and they’ve decided to roll with it ever since, turning the name into an ethos and a brand.

“We’re two gay guys in rural Ohio. I was very concerned [when we moved here] with the people around us. What are they going to think of us?” Snelling recalls. “They’ve always been very supportive of us, our neighbors around us, so that’s positive. But it’s a concern when you look for a new supplier, with how people react.”

RELATED: The Rancher Creating Community for Queer Farmers, One Social Media Post at a Time

Snelling says he’s also had a few customer emails with complaints about the couple “flaunting their lifestyle” on their marketing or in their newsletters. In those instances, the orders are refunded and the customer is blocked. For Snelling, embracing the Gay Goat Guys name has helped weed out people with whom they don’t want to do business by being upfront and unapologetic.

It’s that upfront and open presentation that has also endeared the couple to their social media followers. They post regularly on Facebook and Instagram, where they share pictures and stories from the farm. They’ve also expanded their operations, producing goat’s milk soap, skin care and candles.

It’s a lot of work, but Snelling and Wince have learned to play to their strengths and work together on the farm. “We’ve been together for 28 years now. After this much time, you learn each other’s limitations,” Snelling says. “[Wince] is much better with financing and keeping track of the inventory and supplies for the business…and I do most of the daily stuff with the goats, and I love it.”

That love for the goats definitely shines through on the Tilton Hollow social media pages. The goal is to show the world their slice of life, their family and how each member of their flock is just as valued as the next.

“Our motto and our mission statement is ‘goats first.’ We put them ahead of everything else,” Snelling says. “We’re not trying to be rich. The main goal is to get people to think differently about goats, and maybe encourage people to raise animals, keep a few chickens or grow some food. We try to inspire people and encourage people. If we can reinvent ourselves in our 40s, and go down a different path than we ever expected, you can do little things, too.”