Photosynthesis is one of life’s most quintessential recipes. Plants combine sunlight, water and carbon dioxide to produce oxygen, along with nutrients the organisms need to grow.

Now, scientists have found a way to remove sunlight out of the equation.

In a new study conducted by the University of California, Riverside and the University of Delaware, researchers have successfully grown plants using artificial photosynthesis—meaning the plants have no need for contact with sunlight to grow effectively. Instead, the plants rely on acetate—a chemical compound that plants can use to grow—produced in a sunless lab.

Researchers got around the need for sunlight by using an electrocatalytic process in which  water, electricity and carbon dioxide are used to produce acetate. The acetate then replaces the plant’s need for glucose, which plants create and consume as part of traditional photosynthesis.

The technology isn’t entirely operated without sun. In this case, the electricity captured to create the acetate comes from solar panels. The plants, however, still don’t soak in any of the sun’s rays.

With acetate as a substitute food source, the plants were not only able to grow in complete darkness, some even thrived. According to the study, for some of the plants, the in-the-dark process was up to 18 times more effective than photosynthesis with sunlight.

Unlike the artificial process, biological photosynthesis isn’t exactly energy efficient. According to the study, plants typically end up with just one percent of the energy found in sunlight. 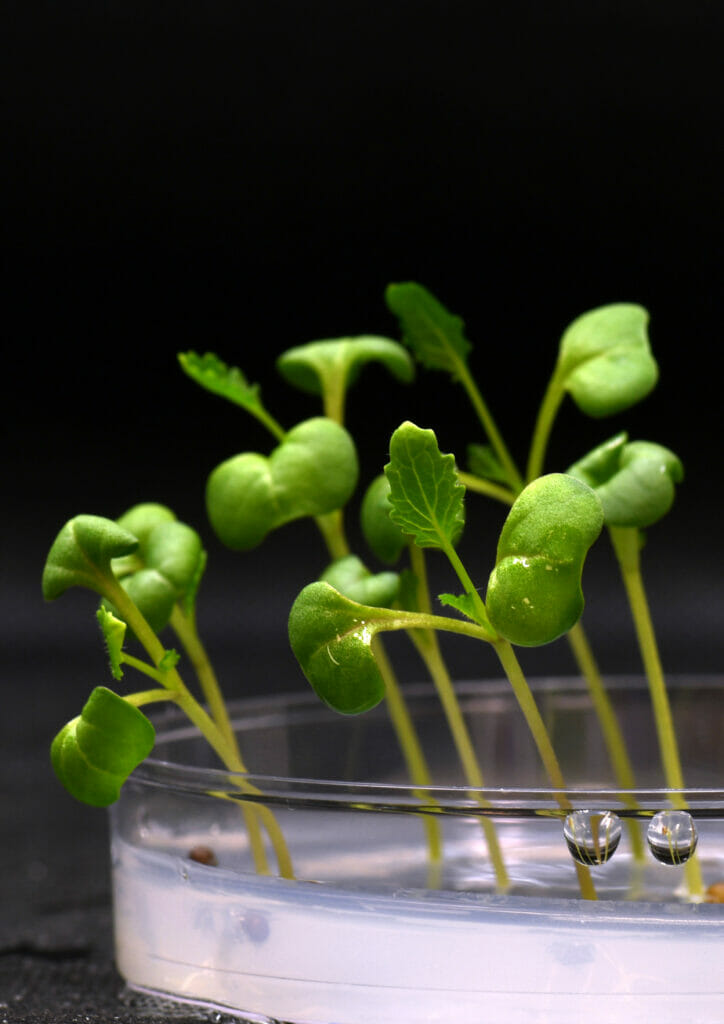 “​​This technology is a more efficient method of turning solar energy into food, as compared to food production that relies on biological photosynthesis,” said Elizabeth Hann, a doctoral candidate in the Jinkerson Lab and co-lead author of the study, in a press release.

The researchers had success with food-bearing crops such as rice, jalapeños, tomatoes, green peas and lettuce, in addition to growing yeast, algae and mushroom-producing fungus.

The innovation leaves the door open to more successful indoor growing, with less need for large outdoor land use when it comes to crop growth in the future. In addition to more effective indoor growing here on Earth, the process provides a possible solution for out-of-this-world cultivation.

said: “Using artificial photosynthesis approaches to produce food could be a paradigm shift for how we feed people. By increasing the efficiency of food production, less land is needed, lessening the impact agriculture has on the environment. And for agriculture in non-traditional environments, like outer space, the increased energy efficiency could help feed more crew members with less inputs.”