In 2017, paleontologists unearthed the 52-million-year-old remains of an ancient relative of tomatillos and groundcherries from an archaeological site in central Argentina known as Laguna del Hunco. Embedded in the sandstone lakebed were the remains of two fruits from the Physalis genus that were so well preserved they still had their outer husks intact. They named the species Physalis infinemundi, meaning “at the end of the world.” Although physalises had long been considered one of the youngest members of the nightshade family, this discovery placed it as the oldest solanaceous fossil ever found by millions of years.

Today, there are an estimated 75-90 extant physalises, most of which are native to the Americas. They can be annual or perennial, vary in size from as large as a golf ball to as small as a cherry and their berries can range in color from green to yellow, orange and even purple. No matter the size or color, the entirety of the genus can be characterized by a papery husk surrounding the fruit, hence their common monikers “husk cherries” and “husk tomatoes.”

Many of these plants have played important roles in the regional cuisines that exist within their native ranges. Perhaps no country better exemplifies this than Mexico, home to more than half of all physalises on the planet. The most well known, both there and abroad, are tomatillos (P. philadelphica or P. ixocarpa), whose name is derived from the Nahuatl miltomatl, meaning “green tomato.” Tomatillos were domesticated by at least 800 BC in ancient Mexico during the time of the Olmec civilization, before subsequently spreading throughout the rest of Mexico, south into Central America and north into the American southwest. The most ubiquitous application for tomatillos is in bright, acidic salsa verde; however, it’s not uncommon to see them featured in braises, sauces, soups and stews.

Further south in the Andes Mountains of South America, another Physalis species has a longstanding presence in local fare. This is species P. peruviana, known in English as Cape gooseberry or Inca berries and in its countries of origin by many names including aguaymanto, topotopo, uvilla or uchuva. It has also been consumed for hundreds, if not thousands, of years and is said to have been a favorite food of the Incan nobility. Unlike tomatillos, which are often consumed when underripe, Inca berries are meant to be consumed when fully ripened to fully enjoy their sweet, tropical flavor that is reminiscent of strawberry and pineapple.

Here in North America, we have more than a dozen native species spread across almost the entire continent that have been utilized by Native American groups since long before the arrival of Europeans. In addition, there are many others that have been introduced and naturalized to this new environment, as well as cultivated landrace varieties that have adapted to these northern conditions. The most well known of these domestic physalises are the broadly named groundcherries, including P. pubescens and P. pruinosa.

In the early 1800s, as groundcherries, Cape gooseberries and tomatillos were rising in popularity in the expanding US agricultural market, they were met with mixed reviews. However, the Pennsylvania Dutch community fervently received them, with the food historian and seedsman William Woys Weaver even going so far as to call them an “ethnic symbol of the [Pennsylvania Dutch] culture.” There are various surviving groundcherry heirlooms from this tradition including New Hanover, Aunt Molly’s and Lehigh Valley.

Although the first thought that likely comes to mind with tomatillos and their ilk is incorporating them in food, my first introduction to them (after salsa verde, of course) came in beverage form. In 2012, I was dining in Arequipa, Peru in one of the city’s many picantería restaurants known for their lunchtime offerings of spicy dishes. After ordering a stuffed rocoto pepper that was much hotter than anticipated, I decided to order a jugo de aguaymanto to alleviate the pain.

Having no idea what aguaymanto was, I was surprised to be presented with an orange-hued, frothy drink garnished with a fruit that looked like a tiny orange tomato with a paper lantern attached. The juice was incredible—simultaneously tart and sweet with a flavor that was strongly reminiscent of pineapple. It was refreshing, and it seemed to ease the burn, even if only in my imagination.

Years later, when confronted with a glut of tomatillos from the garden, I was curious to see if they could also be incorporated in beverages. However, I decided to not use them in their underripe, green stage but rather when they were yellow, sweet and nearly bursting with ripeness. Much to my surprise, they, too, contained that same pineapple flavor associated with groundcherries and Cape gooseberries. I decided to blend them into a simple syrup in order to make a pineapple-flavored daiquiri, sans pineapple. Funky, herbaceous and vegetal are some of my favorite cocktail characteristics, and this one has it all. 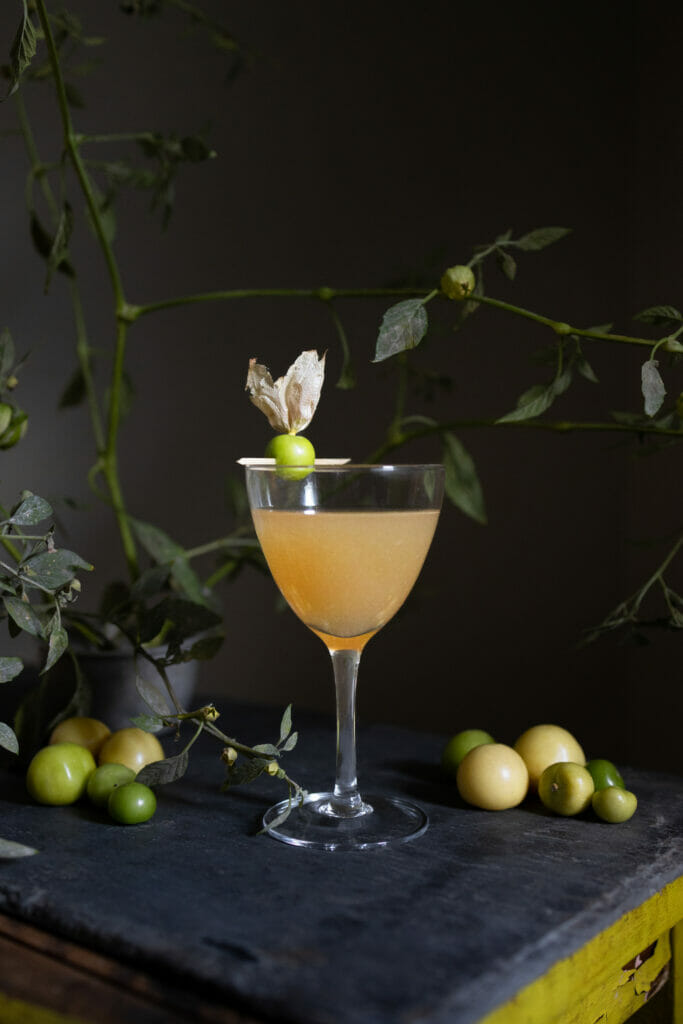 Add all ingredients to a blender and blend until smooth. Strain out solids through a cheesecloth-lined strainer, making sure to squeeze as much liquid from the strained solids as possible. Move the syrup to the refrigerator, where it will store for up to two weeks.

Add all ingredients to an ice-filled cocktail shaker. Shake vigorously for 10-15 seconds and then double strain into a chilled coupe, Nick & Nora or Martini glass. Garnish with a tiny tomatillo.

Danny Childs is the mixologist behind the @slowdrinks account on Instagram and the bar manager at The Farm and Fisherman Tavern in Cherry Hill, New Jersey. Danny’s beverages embody the flavors of the mid-Atlantic by using ingredients foraged from the wild and picked from his cocktail garden. His work has led to a role on the Slow Food USA Ark of Taste committee, a 2019 IACP-nominated cocktail column, and in 2021 he was the recipient of the Philly Mag “Best of Philly” award in the cocktail category. His book, Slow Drinks, will be released with Hardie Grant in 2023.